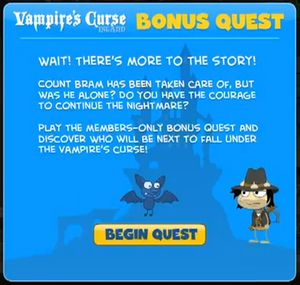 In the bonus quest Christopher reveals that Count Bram gave him a cursed gift that turned him into a vampire. Then a vampire slayer named Cactus Von Garlic arrives at the scene to kill Christopher. However Christopher turns you into a vampire (the poptropican will become a bat) to give him enough time to get away. Luckily, Katya knocks out the slayer to give you a head start to get the ingredeants for the vampire cure (in the little places it said enter for). Once you return to normal, Cactus is surprised to learn about the cure because he thought the only way to stop vampires was to kill them. So Cactus decides to become a 'vampire savior'. After Cactus leaves you comment, "What a weirdo."