The Official Superhero Handbook is a manual made by Ned Noodlehead and given to you. Ned revealed that he used most of his life to research super hero comics for it. It is a paperback book. 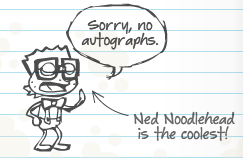 "Your Superhero ID Card identifies you as an official super hero. It will give you access to dangerous areas where normal civilians aren't allowed."

Your ID also shows your super ranking, which is the number of super villains that you've defeated."

"Every superhero needs to have a sweet super outfit! Go to the Cape and Mask Shop to find a perfect one for you."

"Or you can do what I did, and make one out of old bed sheets and underwear."

"To (legally) gain your super power you must prove yourself a hero. Do this by defeating villains and getting stickers on your ID card."

You will need to find a retired superhero for more information." 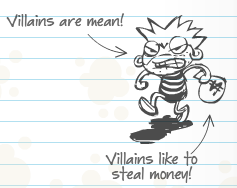 "Super villains are not very nice, because they like to cause trouble. Only a superhero can defeat them."

1. Your greatest super power is your brain. Use it.

3. Use the villain's super power against him/her.

4. Notice your surroundings and use them to your advantage."