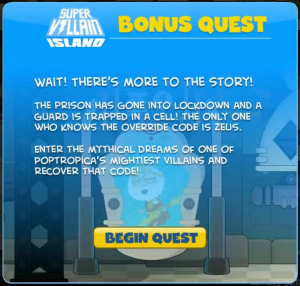 Enter Zeus' dream, and you will appear in the Minotaur's Labyrinth. But it is upside-down, and the colors are completely inverted! Even you're not colored right! So you realize that the funniest thing about Zeus is that he dreams upside down and in negative colors! You'll need to get used to walking along the ceiling. Unfortunately, when jumping to the floor, you kind of float around. Float down the chains until you see a "Z" inside of a bubble, and grab it. It is the first part of the Override Code. Getting back down is easy, because there are ledges down the wall, so float over to them and climb back down the chain. Then go back down the other chain. Float down the next wall, go down the chain, and float down the next wall. You will receive an "S", the next part of the Override Code. Float down the side and go down, and you'll receive a "U". Now float up the top ones and to your left, and then right, and you will get a "3" that's supposed to look like a an "E".

You will automatically end up in Mt. Olympus. It is, of course, upside down and weirdly colored. Now you need to float down the first branch to the right, and you'll get another "3" for the Override Code. Now go left and up and you'll get an "H'. Now right and up for a "T. Float up for a "G. Then something will blast you.

In The Rockies...[edit | edit source]

You will now appear in the cliffs, so bounce off the black cloud and fly right to get an "R". Zeus will try and hit you on your way. Now go into the leaves and bounce into a "4" that is supposed to look like an "A". Now bounce to some rocks and go down to the wall and you'll get a "T". then go right for another "3". The code is "Z3USTH3GR34T, translating to ZEUSTHEGREAT."You will then win the Quest and receive the Dream Guardian.