Super Villain Island is the 30th island released on Poptropica, being released for members on September 27, 2012 and for non-members on October 18, 2012. In this island, you enter into the minds of four of the Poptropica's worst past villains: Dr. Hare, Black Widow, Captain Crawfish, and Binary Bard. 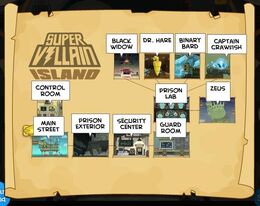 For the main article on Super Villain Island's multi-player room, the You Know the Drill Eatery, go here.

It has an app, and can be bought for free after updating it.

On the Daily Pop

On the Creators Blog