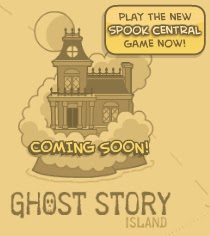 Ghost Story Island during the time that you could play Spook Central.

Spook Central is the MiniQuest for Ghost Story Island. In it, you must capture five ghosts that are wandering through Poptropica. The prize is a Ghost Hunter Suit. This sneak peek game is no longer available, and most likely will not be again.