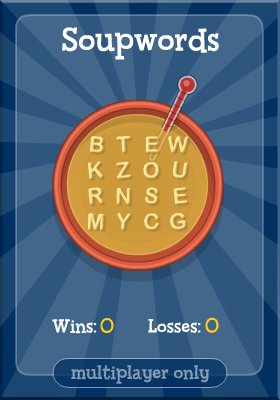 Soupwords is a word game similar to the classic board game Boggle. It can only be played in Common Rooms.

In this game, you have to form as many words as you can from 16 letters that appear in a grid. The game gets its name because the grid of letters appear just like noodles from alphabet soup. To form words, click on each letter in sequence and then click the OK button on the spoon below. To be in the word, each letter must be adjacent to the one before it. If your word is acceptable, meaning it appears in the dictionary, you’ll get points for it.

This game is a race against time, so try to spot the words as quickly as you can.

It helps to focus on one corner of the grid at a time and to try to make as many words starting with those letters as you can. You get two points for each letter in your word, so it helps to try and complete as many 4 and 5 letter words as you can. But don’t waste time looking for long words if you don’t immediately find them. It’s a lot easier to put together three 3-letter words than two 4-letter words, and they’ll end up being worth more!