Sir Cador is a noble Astro-Knight along with the knights Sir Gawain and Sir Pelasus. He went to the Jungle Planet (X-15 Y-15) in search of Elyana.

His armor is green, presumably for camouflage. He also has a yellow visor. He wears a dark green cape and wields a Laser Lance.

As the knight was finding the Princess on the Jungle Planet, he crashed near the flowers and left his Laser Lance there. He eventually got up to the Phoenix's nest. He then found a cage, not knowing what was in it, he then remembers about his weapon. He failed to find the princess because he couldn't pass the family of Atomic Phoenixes. He then meets the Chosen One and tells his story, and says that he should use the Lance to cut open the cage. The Prisoner turns out to be a Pegasus, then the Mother Phoenix comes, which is destroyed by the Chosen One. Since the Princess isn't there, Cador decides to join the Chosen One's search to find her.

After discovering that the princess wasn't in this galaxy, the entire troop decided went to the Crystal Gate to reveal the key to another galaxy on an asteroid. When they got there, Sir Cador sensed magic.

After the war, Sir Cador remarked on how the Chosen One is a model for all. 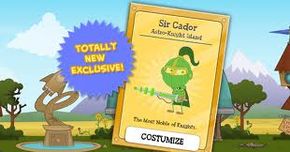 A six-inch toy was released for Sir Cador. With it came a special code with would unlock a special prize - a Sir Cador outfit including the Laser Lance. It was originally sold at Toys R Us.