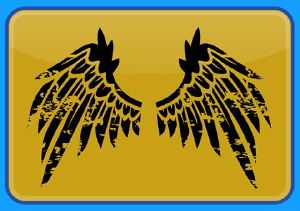 The Seraphim is one of the 8 tribes of every 100 years that competes in the Poptropolis Games.

A pair of black wings in a mustard-brown colored background.

The Seraphim common room resembles a ruined castle with the statue of an angel holding a crystal harp as the centerpiece. The common room appears to be located on a floating island in space as many such islands can be seen in the distance. The castle is decorated with mirrors and candles which you can light up by clicking. There is also a raven and a telescope aimed into space.