Samuel Brains is the founder of Berry Delicious Smoothies from Zomberry Island and accidentally created the Zomberry epidemic in Eastman, his hometown. After realizing what had happened after he made the foolish mistake of importing contaminated blueberries from Cleveland, he went into hiding. He came out of hiding after Eastman had been cured, offering everyone free smoothies, making another foolish mistake, as he was chased by Abe and Joe Puddy. It is unknown what his current status is, but he probably went out of business. 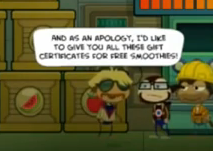 Though he only appears at the end of Zomberry Island, he can be seen in a portrait on the wall of the Berry Delicious Smoothie Shop. He is the cause of the Zomberry epidemic as he was the one who imported the contaminated blueberries from Cleveland and used them in his smoothies, thus turning whoever drank the smoothies with blueberries in them into foul fruit- Poptropican hybrid creatures called Zomberries. At the end of the island, he appears and you accuse him of starting the epidemic in the first place. He then apologizes and offers to make it up to everyone by offering free smoothies. He is then seen being chased away by Joe Puddy and Abe. Dr. G. Romero then notices that he dropped the island medallion and hands it to you. Apparently, Samuel was one of the survivors who wasn't zomberrified.