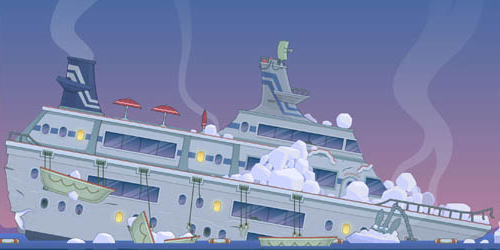 The S.S. Pequod is the ship that sinks in S.O.S Island. In the island, you cannot stop the ship from sinking. All you can do is to save the people that are in the ship. The ship sinks because, similarly to the Titanic, a hole had been ripped in its side by an iceberg.

The S.S. Pequod plays a big role in this island. The ship sinks and you must rescue all the remaining passengers before they drown. The remaining passengers are Ishmael, the tour guide, the engineer girl, The Cook and Captain Boomer. Each time you save one, the ship will submerge a little more until it finally sinks under the surface. By the end of the island, it is revealed that Captain Boomer had rammed the ship into the iceberg while pursuing the White Whale.

Since the tragic sinking of the S.S. Pequod, 8 of the oil compartments buckled, releasing oil into the frigid waters of the North Atlantic.