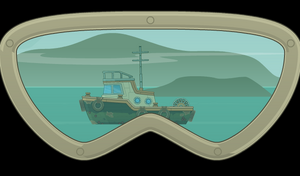 As seen through the viewer on Cryptids Island.

The Ribica is a small fishing vessel that first appeared in Counterfeit Island.

The Ribica sits at the docks, most likely docked after a good day of fishing, shown by the net (on the ship) and crates (nearby the ship) full of fish. At some point, a piece of paper contained part of a picture of a gargoyle floated by and landed on the top of the Ribica's mast. Later though, your Poptropican finds the piece of paper.

The Ribica appears at the Loch Ness and can be seen occasionally on the lake, through the viewer.