Reality TV Island is the 11th island released on Poptropica which based on the hit reality TV show, Survivor.[1] The island was released on February 24, 2010[2] for Members and March 24, 2010[3] for non-members.

To complete the island, player has to compete against 7 different people - some who are characters from previous islands, others who are new- with 7 different challenges, in order to be a hero of the player's hometown (Wayside Town). 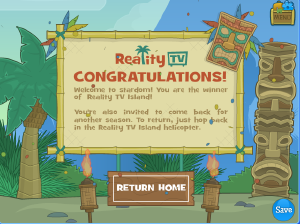