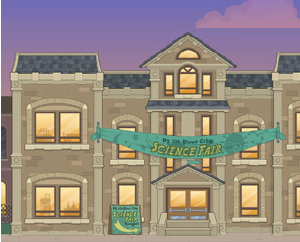 Public School 201, shortened to P.S 201, is the local school of River City. The only known student, other than the ones that participated in the science fair, is CJ, and the only known teacher is Mr. Silva, who is the science teacher.

It hosts many science fairs, four of which C.J. has won and one where she earned second place.

It's sports team, the River City Rodents, happens to be very popular throughout Poptropica; judging by the fact that a Rodents banner was seen in the Sluggers store in the Twin Palms Mall.