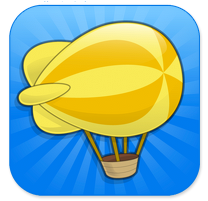 The Poptropica App allows users to explore and play islands in Poptropica using their own mobile devices. However, it does not allow users to actually play Poptropica online but instead allows them to play islands on their mobile device. As such, features such as Common Rooms do not exist. Since the game is not connected to Poptropica itself, users cannot login with their existing accounts and must instead create a new one.

Tap and hold the screen to run in that direction. To jump to a specific area, quickly tap the designated area. Interact with people and objects by tapping them. Items can be collected by running over them or tapping them.