You may be looking for the car that housed Pinkerton Government Services during the John Bull investigation. 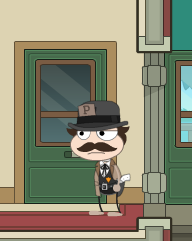 The Pinkerton man inside the John Bull during the investigation.

In 1893, Grover Cleveland and a Pinkerton detective boarded the John Bull to find out what happened to Thomas Edison's motion capture device. When Nikola Tesla was framed by the thief, Pinkertons locked him up in the Coal Car of the train. However, a Poptropican and Grover Cleveland were able to put the pieces together to discover that Tesla wasn't the thief, and they cleared his name. Later, it was discovered that Mademoiselle Moreau was the thief, and had been trying to frame Tesla to get at his transformer so she could stop the Ferris Wheel from turning so that Paris would always have the best world's fair. When the Poptropican cornered her at the top of the wheel, she misstepped and fell. The Pinkerton security, along with Grover Cleveland, caught Moreau in Harry Houdini's water torture cell until they could find a suitable prison for her.