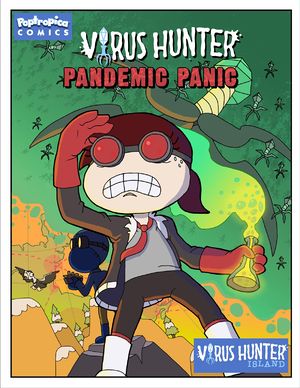 The official cover for Pandemic Panic.

In Northern Canada, Dr. Lange and her group of explorers search for the world's deadliest creature. After searching various places and encountering several animals including a grizzly bear, a moose, and a group of chipmunks, one of them finally spots the creature in the distance.

It is revealed that the creature is a Labrador Duck (Camptorynchus labrodorius). When a park ranger sees them, he asks them what they were doing. Dr. Lange explains that they are representatives of the Poptropica Disease Center (P.D.C) and that the Labrador Duck carries the world's deadliest virus, the CC13 virus.

Dr. Lange extracts a virus sample from the duck's saliva while she explains that they are going to examine the virus and create a vaccine to cure it. After letting the duck go,the park ranger treats the trio to maple syrup smoothies and Dr. Lange leaves the sample on a tree stump a safe distance from the camp. Meanwhile, a tour bus sets out into the wilderness and stops at their camping spot.

As the tourists unboard the bus,one of them yells at her "tour buddy" to hurry up but the "tour buddy" claims to have lost his jam. He sees the virus sample on a tree stump and, thinking it is jam, takes it away. Meanwhile Dr. Lange wakes up, sick to her stomach and realizes in shock that the sample had a few footprints in the snow around it.

Dr. Lange sees and picks up the note left in the virus sample jar reading how the tourist used the sample on his poutine or 'Canadian Fries' thinking it was jam and, feeling bad, left a dollar in return. Dr. Lange then distresses about how somebody put the world's deadliest virus on their fries while one of her explorers calls to her asking if she wants the last cup of maple syrup.

The explorer goes to Dr. Lange asking what's going on. Lange then yells to the explorers to analyze a strand of hair left attached to the note and to find the person it belongs to screaming that it will be all over if they don't.