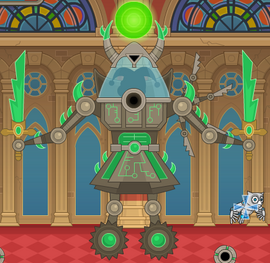 Mordred's Robot was a robot that the Binary Bard created for battle purposes.

The robot resembles a large mechanical Samurai with wheels for feet. There is a control room in which Mordred sits. In front of it, there is a hole that shoots projectiles and drops bombs. The robot wields a pair of samurai swords. It also sprouts horns near the top. Between the horns is the Green Fuel Orb that powers the robot.

Samurai Sword Spin - The robot can spin its samurai swords around, whacking you backwards.

Spiky Projectiles - The robot can shoot spinning spiky heat-seeking projectiles that follow you around.

Bomb Drop - The robot can drop bombs that flash when they are about to detonate.

Laser - The robot can fire a laser, and it will knock you backwards.

It is unknown how it was used, but it has been confirmed that Mordred used his robot in the Battle of Arturus.

The Chosen One (you) ventured inside Mordred's Fortress, where s/he found the Princess in a cell. After that, Mordred enters his robot. Merlin then flew in, and Mordred realized that he was a traitor. Mordred fired the circle with spinning blades, but Merlin evaded the weapon. Merlin grabbed two bombs and dropped them on Mordred and his robot. Mordred then fired a laser at Merlin, who fell to his demise. The Chosen One ran in and jumped on Mordred's robot, and then jumped on two chandeleirs. Mordred fired at the chandeleirs, which fell on his robot, and then knocked the Green Fuel Orb off of the robot. Mordred drove his robot away, and then jumped out and tried to steal the Orb once again. The Princess was freed from her cell and knocked Mordred out. The Chosen One and the Princess took the Orb and Merlin back to the Kingdom of Arturus. Power was once again restored to Arturus, and the Princess had Merlin repaired.