Mordred is an villain that formerly lived in the Kingdom of Arturus. He is also known as the Binary Bard, and is a Poptropica Creator. He is based on the enemy and son of King Arthur, Mordred.

Mordred was very creative, and believed anything was possible, as proven by the fact that while most would be speechless, when he saw frozen time, he was more amazed at your creativity in finding a way to get through the door. (Super Villain Island). He seemed nicer before he was locked up (as seen briefly in Super Villain Island), and after escaping the dungeon, he went mad. After transformation into a cyborg his personality became more evil. He was nicer to Elyana, but after transformation, he had a more sadistic and selfish personality, kidnapping her.

Similar to Dr. Hare (since they are both from different time periods) he believed he was the only one in Poptropica to have such genius. He believed himself to be the most ruthless villain in Poptropica, and took that too far, trying to prove it by exaggerating his plots to make them even more evil, and although he was rarely ever sloppy, this belief was his downfall many times.

Unlike usual, he seemed very cowardly after kidnapping the king, probably because that scheme would be harder to get away with. Once the king was freed, he got scared and ran. (Poptropica Adventures)

Mordred had tan skin at first and looked similar to William Shakespeare. After transforming, he looks like a cyborg jester.

He had one side of his face metal with a bionic eye, the other side normal skin and a normal eye. He wore a yellow and purple jester outfit to go along with it. Although his body looks like a normal human body on one side, he probably had metallic shields all over, which were shown when his suit was activated in Super Villain Island.

He has no super powers or superhuman abilities, but he is a genius and an amazing inventor. He had very bright ideas, even if some were a bit too advanced for the people of Arturus. He is one the smartest people in Poptropica's history, and is compared only to Dr. Hare, as they are both scientific experts in two different timelines, but they are equally matched.

His suit has many unique abilities as well. He can use it to change shape and look like someone else. He used it to transform into the princess and steal the Weapons of Arturus from the Chosen One. 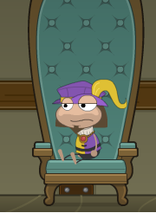 Mordred trapped in a room during his escape in his Dream in Super Villain Island.

During his time in Arturus, Mordred created many highly advanced technological devices. He created a robotic owl as a companion for himself; which he named Merlin, and a mechanical mouse. He started studying in the dark sciences, which enraged the King and Queen of Arturus. Mordred was then thrown in jail. However, Mordred was able to break and tunnel out of jail, he then resumed work in his Lab

secretly. The royal guard's discovered the location of Mordred's Hideout, so Mordred escaped into space using a spacecraft that he had not even finished off yet.

After his escape, Mordred somehow became a cyborg. It is unknown why he became a cyborg. It is possible he was injured badly, or he might have been testing cybernetics on himself. He also could have crashed, and turned himself into a cyborg to survive. Half of his face remains cybernetic, and one of his eyes were replaced with a round red light. He also wore a purple and yellow jester suit, which is a reference to his old suit he wore. He was then known by Poptropicans and others as the Binary Bard. Mordred eventually was well known through the universe as a wizard (as said by the Pewter Moon aliens). A secret order whom were followers of Mordred along with the princess was writing letters to him in secret. Mordred then sent five spacecrafts to Arturus to attack the Kingdom and take the Princess to his fortress. At one point, he attacked the Pewter Moon. It is unknown when he attacked the moon. It is possible it was during his attack on Planet Poptropica, but this is unknown. On an asteroid, there was a giant key stuck in a stone which unlocked a portal to Mordred's Fortress, which was located in another Galaxy. Only the Chosen One was able to pull this key from the stone. It is unknown if Mordred built this portal. He most likely didn't. The Chosen One, (you) came to the Asteroid, pulled the key from the stone, and entered the portal. Mordred had used his powers to disguise himself as the Princess. However Mordred, who was disguised as the Princess, was wearing purple and yellow clothing, which is obviously his signature clothing color. Mordred asked the Chosen One (you) for the mystical weapons of Arturus, which the Chosen One handed over to Mordred. After he received the Weapons, he revealed himself to the Chosen One and thanked them for the weapons and explained his plan to become king of the universe, he then teleported away to the inside of his Castle. He left behind a puzzle, which the Chosen One solved. The completed puzzle was a door to Mordred's Fortress. Inside, the real Princess was being held prisoner and Mordred had gotten into a robot which had bombs, two spinning blades, a round flying object with spikes, and a laser. Merlin flew in behind the Chosen One and flew towards Mordred. Mordred quickly realized Merlin was a traitor, and began dropping bombs and shot his round object with spikes. Merlin was able to drop two of Mordred's bombs on his robot, but Mordred then shot a powerful laser at Merlin, destroying him in the process. The Chosen One then ran in and began battling Mordred and his robot. The Chosen One leaped on a chandelier twice, which Mordred shot with his laser, and landed on his robot. Mordred's robot then began to malfunction, and he rolled away. The Orb which had brought power to Mordred's robot and Arturus fell out of the robot. The Princess was then freed from her cage in which she was locked in. Mordred ran over to the Orb and tried to once again steal it, but the Princess jumped down and knocked out Mordred. The Chosen One and the Princess then escaped back to the Kingdom of Arturus with the Orb, leaving Mordred trapped. After many years in space, Erewhon Prison staff freed him and took him to Erewhon Prison.

Between the time he was defeated and left in space, he was able to accomplish more than meets the eye. He created his own dimension, and found a way to use multi-dimensional travel to return to the Poptropican dimension and land on the planet of Poptropica itself. The king didn't recognize him as he had never seen him in Binary Bard form. The Bard kidnapped the king and the squire and left a robotic replacement of the king. He left the squire on Fire Planet and took the king with him to Jungle Planet. But then a Poptropican finds them, frees the king, and pursues the Binary Bard, trapping him in his own dimension. Afterwards, the Binary Bard was probably pulled out of space by the Erewhon staff. 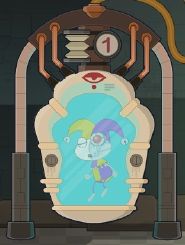 The Binary Bard in Erewhon Prison in deep sleep

In Super Villain Island, he was caught and imprisoned along with Dr. Hare, Black Widow and Captain Crawfish. Dr. Jupiter will send you in their dreams with a dream machine to bring back their totems containing their evil. You need the stopwatch from Captain Crawfish's dream and the crystal key from the Black Widow's dream for Binary Bard's dream. After you got all 4 totems Dr. Jupiter will reveal himself as Zeus and you need to destroy all 4 totems in the Zeus battle. Binary Bard and the other 3 villains will swim away after Zeus destroys Erewhon and you and the four fall into the water.