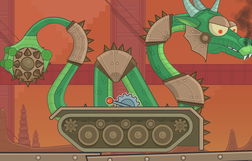 The Dragotank in Meltdown Cave

Meltdown Cave is a cave in the Fire Planet in Space where you battle the Dragotank. It is relatively small. This is the only location where you can use the Ice Arrow.

Sometime before the invasion of the Kingdom of Arturus, Mordred discovered the Meltdown Cave and built the Dragotank there to attract the attention of one of Arturus's knights and throw them off track, but the knight soon stumbled upon the place in his search of Elyana after the invasion of Arturus. The knight tried over and over again to destroy the menacing metallic monster, but failed every time. But luckily, the Chosen One also found the place in their quest to save the island. Sir Pelasus gave his Ice Arrow to the Chosen One, and with it, they slayed the beast. After that, Sir Pelasus and the Chosen One discovered that the Princess was not in fact there, and the two left Meltdown Cave in order the continue their quest. After this, however, you are unable to enter Meltdown Cave again.