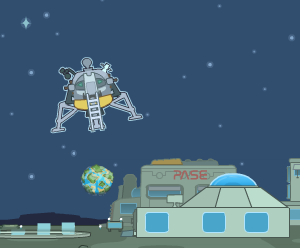 The Lunar Lander was part of the X-20 that allowed the pilot to land on the moon without using the ship, which was in autopilot.

Usage during the Salerno expedition

During this expedition, a Poptropican who was filling in for the pilot had to land the Lunar Lander on the moon. They had to keep the lander stable and control its speed to land it perfectly, which was not easy. The lander arrived right next to the first lunar facility.