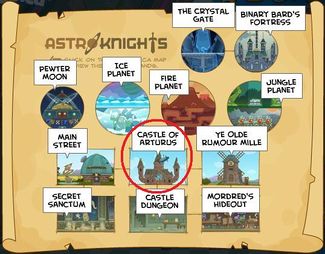 The Map of Astro-Knights Island 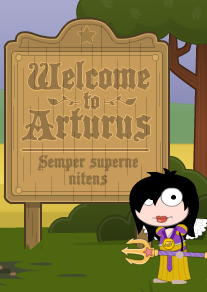 Arturus is the kingdom on Astro-Knights Island. The King, Queen and Princess all live in the Castle of Arturus

While the kingdom's origins are still unknown, the most recent history can be traced.

Mordred was a scientist who not only brought electricity and power to the kingdom, but also performed illegal experiments. The King had Mordred arrested under the charges of breaking the laws of nature. However, he escaped, and continued his experiments. The King then order the royal guards to seize him. He, however, escaped via spacecraft to Pewter Moon before the guards arrived leaving Merlin behind.

The Battle of Arturus was Mordred's revenge on the kingdom. It explains the damage on the buildings. Surprisingly, the kingdom manage to win the battle despite being outnumbered and outgunned by technology.

The Search for the Princess[edit | edit source]

The Events of Astro-Knights[edit | edit source]

A foreign poptropican, who turns out to be the Chosen One, traveled to the kingdom by blimp. The Chosen One surveyed the damage and then set out to rescue the princess and the three knights and defeated Mordred, to the surprise of the whole kingdom, the Chosen One succeeded in their task and brought power back to the kingdom. The King then had him/her knighted.

The Royal Guards are the kingdom's armed forces. They served in the Battle of Arturus.