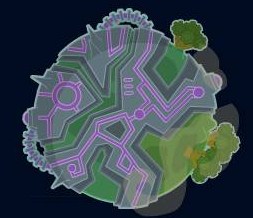 A view of the planet from space.

The Jungle Planet is a planet in Astro-Knights Island. It is covered with mechanical vegetation. Here you will find the Laser Lance.

Mother Phoenix - A large Atomic Phoenix. During the search for the princess, a knight named Sir Cador searched and failed his quest at Jungle Planet due to the Phoenix.

Metal Caterpillar - A metallic, caterpillar-like creature that can electrocute you. They live in the treetops of the Jungle Planet.

On your Spaceship, you can find information about the Jungle Planet: