The Jet Pack is an item found on the Main Street of Early Poptropica. It helps you get the flag on top of the water tower, which was presumably stolen from the Pilgrims.

The pack is equippable, serving as a backpack. When you hold your cursor and click above your character, the jet pack will force them upward. A stream of air will pour out from the bottom.

You can only equip the back pack on Early Poptropica, Wild West Island, and two Mini-Islands: Dr. Hare's Secret Lab and Don't Be An Energy Hog. It is only intended for Early Poptropica, however, despite the glitches. 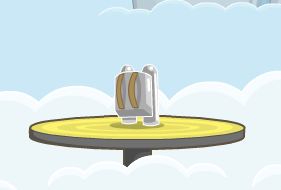 On Early Poptropica, the Jet Pack is found in the Aircraft Graveyard on the far right of the scene. It is laying on a table, and automatically costumizes when you pick it up. It will allow you to reach the flag in two ways: