During his college years, he created the comic Igdoof that ran in his campus' newspaper, The Diamondback. In 2004, FunBrain.com hosted a book written by Jeff entitled "Diary of a Wimpy Kid". Soon after, the e-book became a hit and a printed version was demanded by fans. Their desire was satisfied.

Diary of a Wimpy Kid

Years later, Wimpy Kid was made into a movie series. Three were movies were made, encompassing four books: the first, second, third, and fourth. The last two were combined into one story. A Movie Diary book was also released in which there was information about the movie and how it was made.

He also played background roles in the Wimpy Kid films.

Because of Pearson's previous involvement with Jeff, it was them who he turned to when he came up with the idea for Poptropica. Him and a few others (one being Jordan Leary) began discussing the idea of the game, and in 2007 it was released to the public. He created the basic Poptropica model, as well as programmed the basis for the game.

He currently lives in Boston, Massachusetts with his wife, Julia, and their two sons, Will and Grant. He has a full-time job as the design director of a Boston-based Internet publishing company.

While never officially announced, it is highly possible that Jeff Kinney's alias on Poptropica is Comic Kid, due to Jeff's work with comics. Comic Kid was a semi-frequent author on the Creator's Blog, and in the game is known as Ned Noodlehead. This said, Comic Kid regularly posted sneak peeks to upcoming islands, and also posted a series of comics about Ned Noodlehead as well.

You can read more about the character, Ned Noodlehead, here. 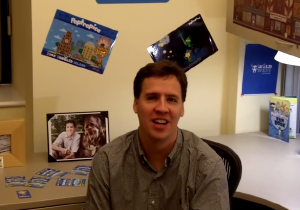 Jeff Kinney is the face of Poptropica, appearing in tons of promotional videos and blog posts. His first appearance was in a promotional video for Cryptids Island, in which he talked about his fascination with cryptids along with his excitement for the new island. Beyond that, Jeff has appeared dozens of times throughout Poptropica's history. This is not a complete list.