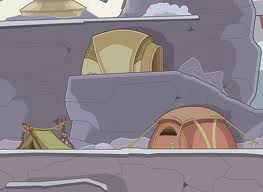 The Himalayas is an Asian mountain range mainly along the border of India. To climb the Himalayas, you need a sherpa guide.

Edmund Hillary lost his climbing goggles and is unable to finish his climb of Mount Everest  (one of the Himalayan Mountains) until he finds them. The goggles are in the possession of an Aztec warrior. You can also find the original model of the Statue Of Liberty on the tallest point of Mount Everest.

The Himalayas is one of the four (later five) areas you must visit. It is supposedly home to the Yeti. You need a sherpa guide to get to the monastry where the Yeti Scalp lies. However, the monks will not let you take the scalp but they will give you an unlit oil lamp. There is also a supposed yeti footprint you must take a picture of, but it turns out to be a snowshoe print.

A cardboard version of the Himalayas was used in the game Himalayan Hurl.