Hercules is the son of the Greek God Zeus and the mortal Alcmene.

In the beginning of the island, Hercules only offers to help you by giving you his autographed photo. Later on, when Athena asks you to, you can persuade Hercules to get moving by informing him how he needs to help or Zeus will start ruling poptropica. Hercules says he would help, but he doesn't feel like walking. At that you can whip out the magic mirror Aphrodite gave you and teleport both you and him to the realms of the gods.

He appears in Mythology Island, signing autographs for 10 Drachmas. He helps you on your quest by using his extreme strength to move a boulder blocking Hades' throne room and pounding on a platform that blocked Poseidon's underwater throne room. He follows you until you reach Mount Olympus, where he sees a snake emerging from the ground, revealed to be Medusa, who turns him into a statue. 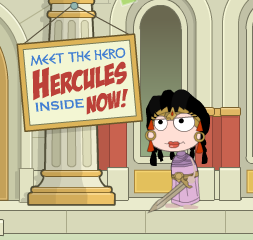 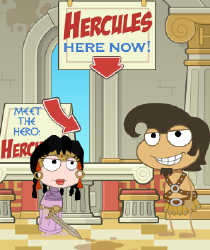