The Golden Egg is a giant egg owned by the Purple Giant, which you have to retrieve for him in Early Poptropica Island. 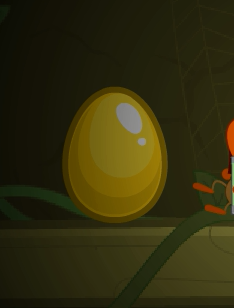 The Purple Giant apparently lost the Golden Egg. It is located inside the Dark Room on Early Poptropica Island. You must use the Glow Stick to light up the dark tunnel and find it.

Once you give it back to him, he will lift his club, allowing you to proceed and go to his garden.