While hanging around a rumour mille tells a lot about a character, his personality changes from island to book. On the island, he tells you a good guess at the attack, while in the book, he tells you something completely useless. In both, however, his physical appearance is described and shown the same way. He wears all green, with a green head band and suit. He has dark hair and freckles, along with bucked teeth. 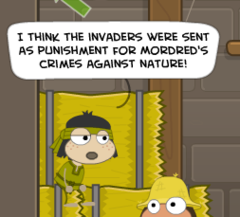 You'll find Garth inside the Ye Olde Rumour Mille, sitting on a haystack in the ground floor. He tells you that the reason why the aliens come to earth is to punish Mordred for his crimes against humanity - however, you find out that this theory is false later on.

In the book, Alice and Simon walk into the mill, and Garth immediately recognizes Alice, calling her Allie. He tells them that apparently Sir Gawain wears green underwear.