Elves are mythical creatures in the forest of Twisted Thicket. 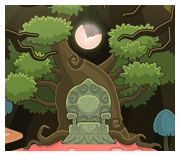 Elves resemble green humanoids with pointy ears. They wear clothing made of plant and animal parts and most wield spears or knives.

Elves are more intelligent than most of the other mythical creatures of Twisted Thicket, able to form sociable groups, ruled by a single queen. Like trolls, they are capable of speaking English. They are also skilled and determined warriors.

After defeating the first part of the dryads, you will come to a part of the woods inhabited by elves. They will attempt to cut the vine you are on as you swing from vine to vine. Some will even try to tackle you. After this you will reach an area with 4 vines. As you climb up the vine, elves will follow and try to knock you down. At the very heart of the forest, you will encounter a large tree hollowed out with the entrance blocked by brambles. Put in all the runes in order (Lesovyk, Kobold, Jötunn, Näckrosor and Dökkálfar) and the entrance will clear out revealing the Elf Queen's throne room.