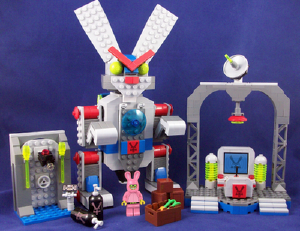 Dr. Hare's Lair is a LEGO CUUSOO set based off of the lair Dr. Hare set up in the Carrot Cake Factory. It was created on January 24, 2013, and received 10,000 supporters on August 15, 2013. It is now in the review stage to decide if it will be a real LEGO product. The promo code costumes for the LEGO CUUSOO project are now expired. And thus so far, their are 15,000 supporters since the 10,000 supporters.

At certain times when a certain amount of supporters support the project prizes were given out. Here is a list of them so far:

Sadly, the project never reached production despite reaching the goal of 10,000 supporters.