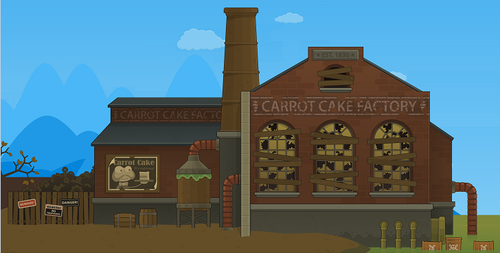 The Carrot Cake Factory is a factory that makes carrot cakes on 24 Carrot Island. It became inoperational, after which Dr. Hare took up headquarters.

The Carrot Cake Factory was first established in 1830. After it stopped operating, toxic waste was dumped into the waters near it, and Dr. Hare used it as his headquarters.

The player must infiltrate the factory, rescue the abducted citizens, and stop Dr. Hare from launching the Rabbot and taking over the world.