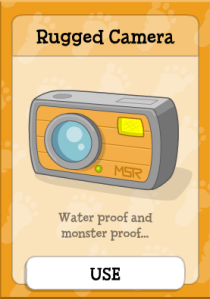 Cameras are items that appear on various islands throughout Poptropica. They come in many different shapes and sizes.

When completing certain points of an island, your poptropican will quickly take a picture using a digital camera which looks similar to the camera on Cryptids Island. These photos can be viewed inside your photo album.

You need a digital camera to take pictures of animals at Big Zeke's Safari. To obtain it, you must first find a gold nugget atop a tree in the Kaya Forests. You can then use it to trade for a digital camera.

You must ask the man at the cart to take your picture for an official Marshal's portrait using an old-fashioned camera.

On Mystery Train, Thomas Edison invents the first video camera, which was then known as a motion capture device. However, it was stolen and you must find it.

There is a camera on Zomberry Island which you can use to temporarily stun Zomberries. It is found in Abe's apartment. You will need it to frighten Big Blue out of the crate.

Harvey Scoops gives you a telephoto camera to take a picture of suspicious activity. However, your Poptropican only knows how to operate a digital camera (which contradicts with when he/she used the camera on Ghost Story Island perfectly well). You have to ask the man in front of the Celebrity Wax Museum on Main Street to "fix" it and he will give you a roll of film to place in the camera.

On the Capri Sun advertisement you can get a free special Photographer costume that comes with a orange camera like all the others, if you press spacebar your Poptropican will use the camera to make a flashing photo. This Ad is now removed from Poptropica, so you can no longer obtain the costume.

The Camera is given to you by Dr. Lange so that you can use the Camera to take a picture of Patient Zero and bring it back to her so that she can track him down.