Black Widow as a contestant in Reality TV island.

Black Widow is the main antagonist of Counterfeit Island. She is also a Poptropica Creator, and her username is blackwidowcreator. Her name and costume are based off of the body pattern of a Black Widow spider.

Black Widow has spiky black hair and a black suit with a red hourglass design, similar to that of a real black widow spider. She has a mole on her left cheek and wears round red earrings. 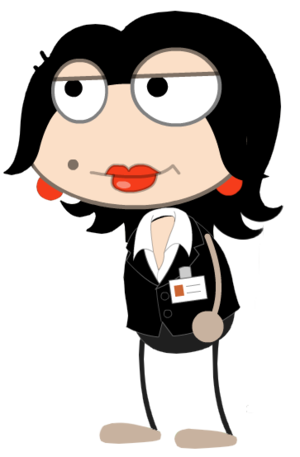 When you first arrive on the island, the Black Widow disguises herself as the Chief Inspector, Veuve Noire (meaning Black Widow in French). After that, the curator gives you something at the PopArt Museum in Early Poptropica; it is a key to Black Widow's house. She also warns you that somebody you trust is watching you closely. When you inspect the house, you find a painting. When you click on it it will reveal "The Scream". After that, the lights go out and you get beaten up by Black Widow. You wake up tied to a chair along with the Strange Man you met earlier. He explains to you that Black Widow betrayed him. After you get free, you come to in an underground hideout. After making your way past her guards, you use a key card the mysterious man had dropped earlier to get into her private gallery. Then, Black Widow shows up to challenge you. Realizing that she may soon be defeated, she suffers a breakdown and decides that if she cannot have all of her stolen art, then no one can, and she begins to throw all of it from a high ledge to be destroyed. In order to defeat her, you must catch every painting and statue she drops. For every four paintings you catch, the Black Widow throws a temper tantrum. While she is doing this, lift up the mysterious man on the lift. Once it is high enough, the mysterious man will knock her out. When he defeats her, she goes to prison. You then earn the island medallion.

The Black Widow is one of the Reality TV Island contestants.You may think she is terrible and weak but she is skilled. Before each challenge, she says, "Watch out - black widows bite!", "Ha! These challenges are child's play!', "You can't defeat me!" or, "Losing is not an option." 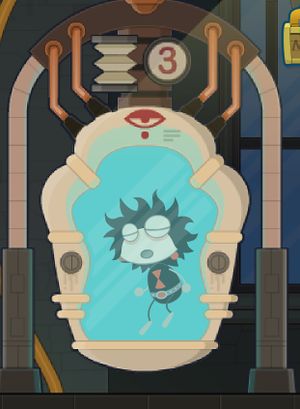 At an unknown point of time, the Black Widow was shifted and held captive in Erewhon Prison For Super Villains, in the Dream Machine capsule and she is one of the villains you have to travel into the minds of to get her totem. It appears that by this time, she has lost her obsession for stealing art, but has sunk deep into self-obsession because she vandalizes art in her dream. Her dream is full of paintings of herself, most of them abstract, though her crowning piece is realistic. Paintings by other artists have been vandalized and covered in graffiti saying things such as "trash" and "not art." You have to clean up the vandalism. As soon as you do, she will summon some spiders to attack you. After you finish cleaning up the graffiti, she will start chasing you and you must destroy her self-portrait to stop her. After you have done so, her totem, which symbolizes her evil, takes the form of a red paintbrush with a spider web pattern will fall to the ground. After all the totems (that are their source of evil)  have been extracted, Black Widow and the other villains escape. Her current whereabouts are unknown.