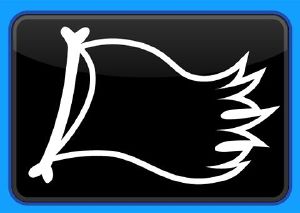 The Black Flags is one of the eight tribes that, every 100 years, competes in Poptropolis Games. You can select to be in this tribe, or one of the 7 other tribes.

The Black Flags symbol is a ragged black flag with a bone for the mast.

The Black Flags' Common Room is styled like an old pirate ship or a pirate hide-out. It occasionally starts raining, complete with thunder and lightning visuals and sound effects. There is a golden mermaid statue and skeletons of pirates scattered all over the place. The mast rises above the ship and a black flag flies over the crow's nest.