BETA Carrotene is a new and improved version of 24 Carrot Island. It was made by the Poptropica Creators to test new features coming soon to Poptropica. 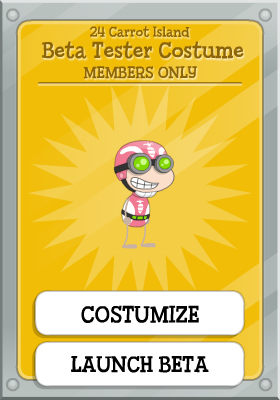 The Creators gave members a special costume which allowed them to play 24 Carrot Island with a full soundtrack, a bigger screen, and better navigation so that they could test the features that would be coming out for everyone soon. The Beta Carrotene is currently the basis for Virus Hunter Island minus a few of the Beta Carrotene features like the common room cursor. It has a medallion.