Athena  is the mythical goddess of knowledge, arts, crafts, the battlefield, counseling, and wisdom. Her Roman name is Minerva.

Athena wears a white toga with a red robe underneath, which is held up by a tied belt of rope. A white cloak is strapped to her clothes and worn over her shoulder. Athena wears her short black hair tucked under a golden battle helmet with a red plume, and she hefts a long, golden spear. She wears light red lipstick, her skin is slightly tanned, and her eyes are relaxed.

She helps the player throughout Mythology Island. She helps the player by growing an olive in each of the olive groves that appear on the island, only hers are larger and glow. The reason for this is because an olive is one of her symbols. After the player clicks on it, Athena will appear. Athena will help you throughout the Island by giving you various pieces of advice and gifts when you click on the glowing olives, such as giving you a golden thread to help you through the Minotaur's labyrinth. After the player completes the island, she will reward you with the island medallion.

Athena in the game is only a regular Roman at the time called Minerva. She is on the Mythology Island. Once you get on there, you need to head to the forest on the left. Minerva will be on a high tree. When you speak to her, she says she refuses to help you, because she is busy throwing her arrow. When you give the package to Hades, in which in Hermes handed to you, once you get back on the tree, she will say that she's missing her arrows, and you have to collect 6 arrows in order to follow her next quest.

Once you do, Hermes is missing his winged hat. You will see a mythical goat wearing it, and in order to get to it, you need the cabbage item. Once it is received, give it to the goat, and Minerva will thank you for the hat, give it to Hermes, and Minerva's quest with you will be finished. 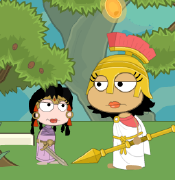 Athena standing under one of her olive trees in Mythology Island. 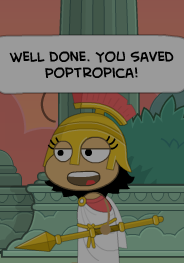 Athena talking to a poptropican on Mt. Olympus. 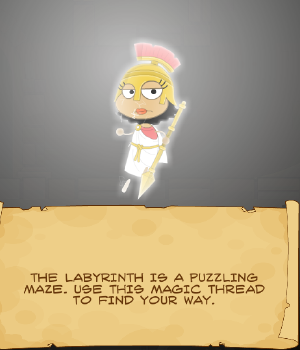