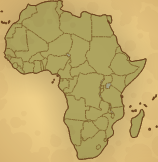 Africa is the second largest continent on Earth. Its most known country is probably Egypt. It is featured in Nabooti Island.

Egypt is a country where the pyramid of Giza is located. The most famous geographic landmark of Egypt is the Nile River. The blue Nabooti gem is in the pyramid in Egypt.

South Africa, like the name suggests, is located at the southern tip of Africa. It is famous for its vast reserves of diamonds and gold and also being the only nuclear armed country that is no longer possessing nuclear weapons. The white Nabooti gem is in the diamond mines.

Mountains of the Moon